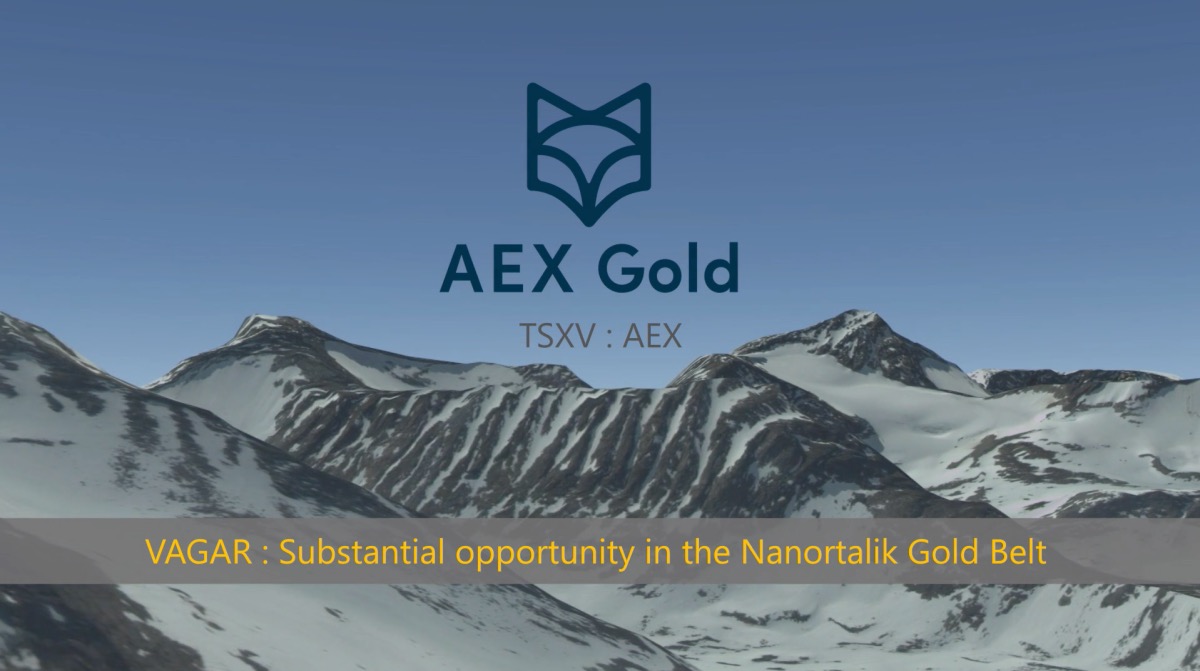 AEX’s 100% owned Vagar gold project is located within the highly prospective Nanortalik Gold Belt and covers the majority of the Niaqornaarsuk Peninsula as well as the immediate surroundings of Nalunaq Gold Mine, for a total of 292 km2. The Niaqornaarsuk peninsula contains the strongest gold anomalies in Greenland, with gold hosted in a variety of settings including high-grade narrow-vein occurrences with coarse visible gold (e.g. 2,533 g/t Au1 at Amphibolite Ridge Vein 2) and in hydrothermally altered granodiorites (e.g. 12.1 g/t Au2 at Femøren). Several gold prospects within the Vagar licence warrant follow-up fieldwork and to date only one of more than 20 targets has been tested with drilling.

South Greenland was first recognised as a prospective gold province following regional stream sediment sampling campaigns conducted by the Geological Survey of Greenland in the late 1980s. NunaOil took ownership of the project in 1990 and carried out multiple mapping and sampling campaigns during the 1990s. The project was transferred to NunaMinerals and Crew Gold (former operator of Nalunaq gold mine) who continued exploration through the 2000s. During this time numerous gold showings were discovered, and several thousand rock chip, stream sediment and scree sediment samples were collected. Much of the exploration was focussed around Amphibolite Ridge, where a small drilling campaign was carried out by NunaMinerals between 2012-13 to test part of the high-grade Vein 2 mineralisation.

AEX acquired the project following NunaMinerals’ bankruptcy in 2014 and has since compiled a large amount of historic data which will inform future exploration. A regional machine learning study led to AEX staking a new licence including the unexplored northern part of the Niaqornaarsuk peninsula.

The Nanortalik Gold Belt corresponds to the southern margin of the 100 km wide Julianehåb batholith, emplaced during the Palaeoproterozoic Ketilidian orogeny (1850 – 1725 Ma) in a continental arc setting. The belt stretches >150 km across South Greenland and contains numerous gold occurrences including the past-producing Nalunaq gold mine.

Gold mineralisation is hosted in a variety of different geological settings across the licence. Gold occurs predominantly in orogenic-type quartz veins where it can reach extreme grades (e.g. 2,533 g/t Au in rock chip samples at Amphibolite Ridge, Vein 2) and has more recently been discovered in hydrothermally altered granodiorites where it is typically associated with As-Bi-W-Cu-(Mo). This latter style of mineralisation can also yield significant grades, e.g. 12.1 g/t at the Femøren target and 14.4 g/t2 at the Øresund target, with the potential for larger tonnages.

Historical diamond drilling undertaken by NunaMinerals in 2012 totalling 1,916 m in 8 holes partially tested the extents of Vein 2 and intercepted 1.4 m @ 10.83 g/t Au3 from 100.6 m (drill hole VAG12-02). AEX visited these drill collars in 2019 and verified the assay certificates for this drilling.  Although drilling was very widely spaced and intercepted the vein at a sub-optimal angle, a variably mineralised structure was observed in 6 holes which remains open at depth and along strike (Figure 2). Vein 1 was intersected in a single hole near surface and remains open at depth in all directions. Femøren and Øresund remain undrilled.

More than 15 gold occurrences exist within the approximately 50 km2 ‘Greater Amphibolite Ridge’ area which is defined by a cluster of highly gold anomalous scree sediments and rock chips. Most of these outlying prospects have returned historical surface samples greater than 10 g/t Au and all are untested by drilling. The most significant are the Bella and Christianshavn targets immediately south of Amphibolite Ridge, where scree sediments have returned up to 1.3 g/t Au2, among the highest ever reported in Greenland. Rock chip samples have returned greater than 10 g/t Au at both targets, which remain a priority for future drilling.

Mineralisation at “LGM Showing” comprises a sheared, sulphide rich zone at the margin of a vertical dolerite dyke. Historic sampling of this zone by Crew Gold in 2003 (license operator before NunaMinerals A/S) has returned gold values up to 56.3 g/t4.

The exploration potential of the Vagar Licence and wider Nanortalik Gold Belt has been demonstrated through past exploration and sampling campaigns. The most advanced targets are at Amphibolite Ridge where NunaMinerals focussed drilling programmes in 2012 and 2013. These targets warrant additional drilling. Significantly, the potential for economic gold mineralisation hosted in hydrothermally altered granodiorites has only recently been recognised and much of the gold belt within AEX’s licences remains unexplored. 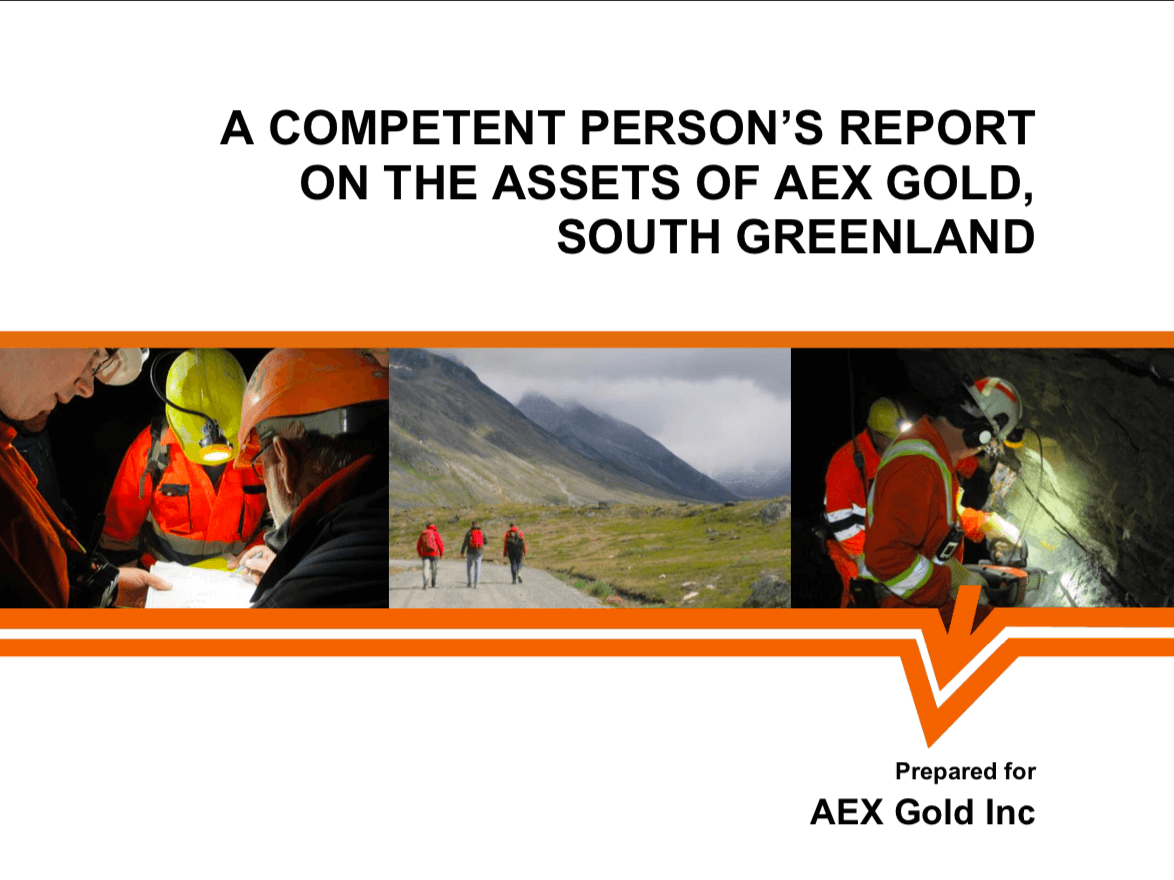